Making this dish was quite an adventure when we prepared it in Ho Chi Minh City during a cooking class. It was also quite an adventure preparing it at home. There are a lot of ingredients and some are not available in your local grocery store. So John and I ventured out to our local Asian supermarket, Ranch 99. Even there we did not find everything we needed and had to improvise. This may be due to the fact that we did not know where to look or maybe the name was different. But in the end we made a fairly accurate tasting soup. Here is the recipe given to us by the Saigon Cooking School – 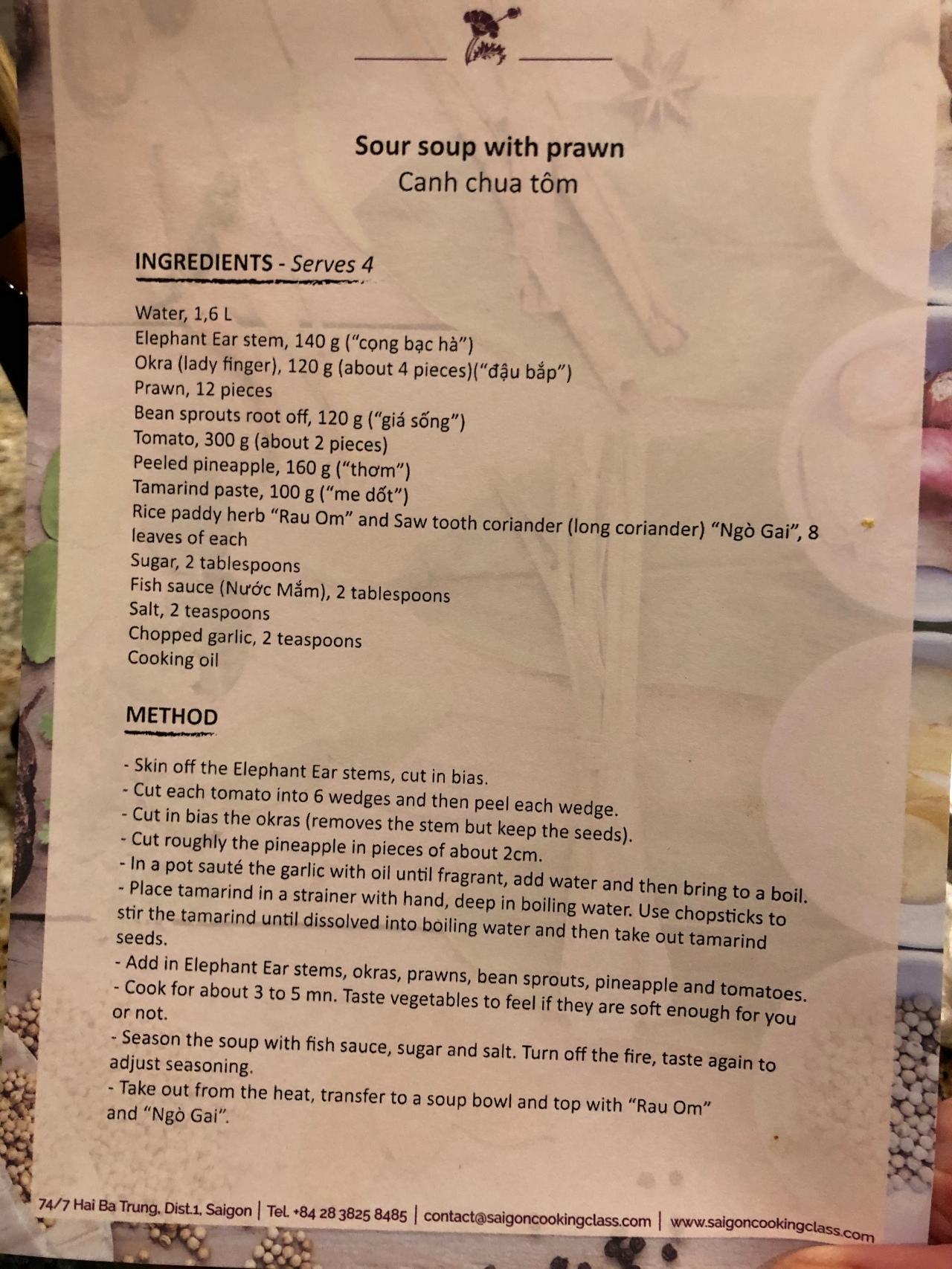 We had to substitute celery for elephant ear and cilantro for the herbs. Here is the mise en place. Once the cooking starts it moves quickly and it is good to have everything ready. 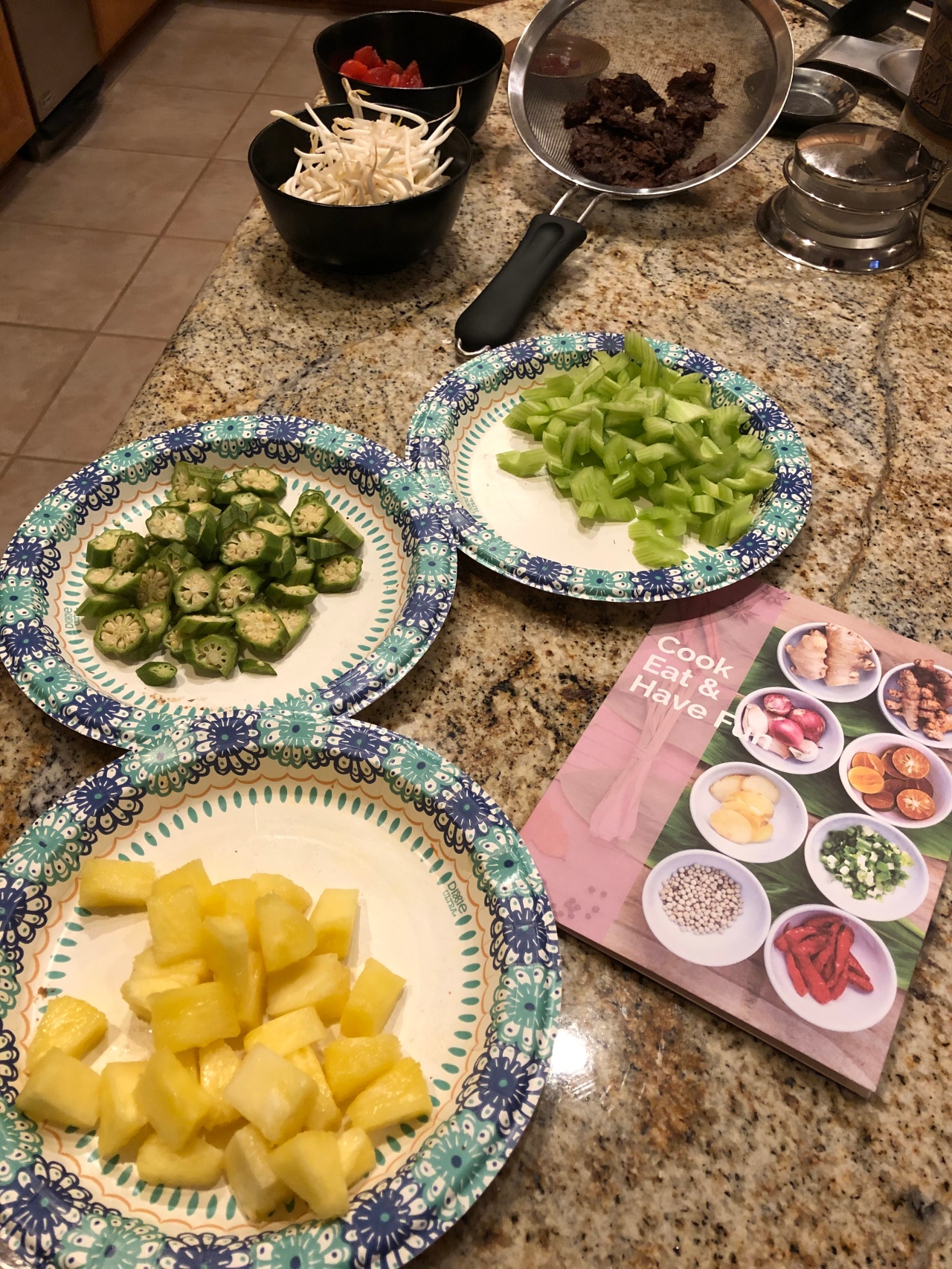 After sautéing the garlic and adding the water you place the tamarind paste in a sieve and lower it into the boiling water. You stir it around and press it through the sieve until it is mostly gone except for a few seeds. 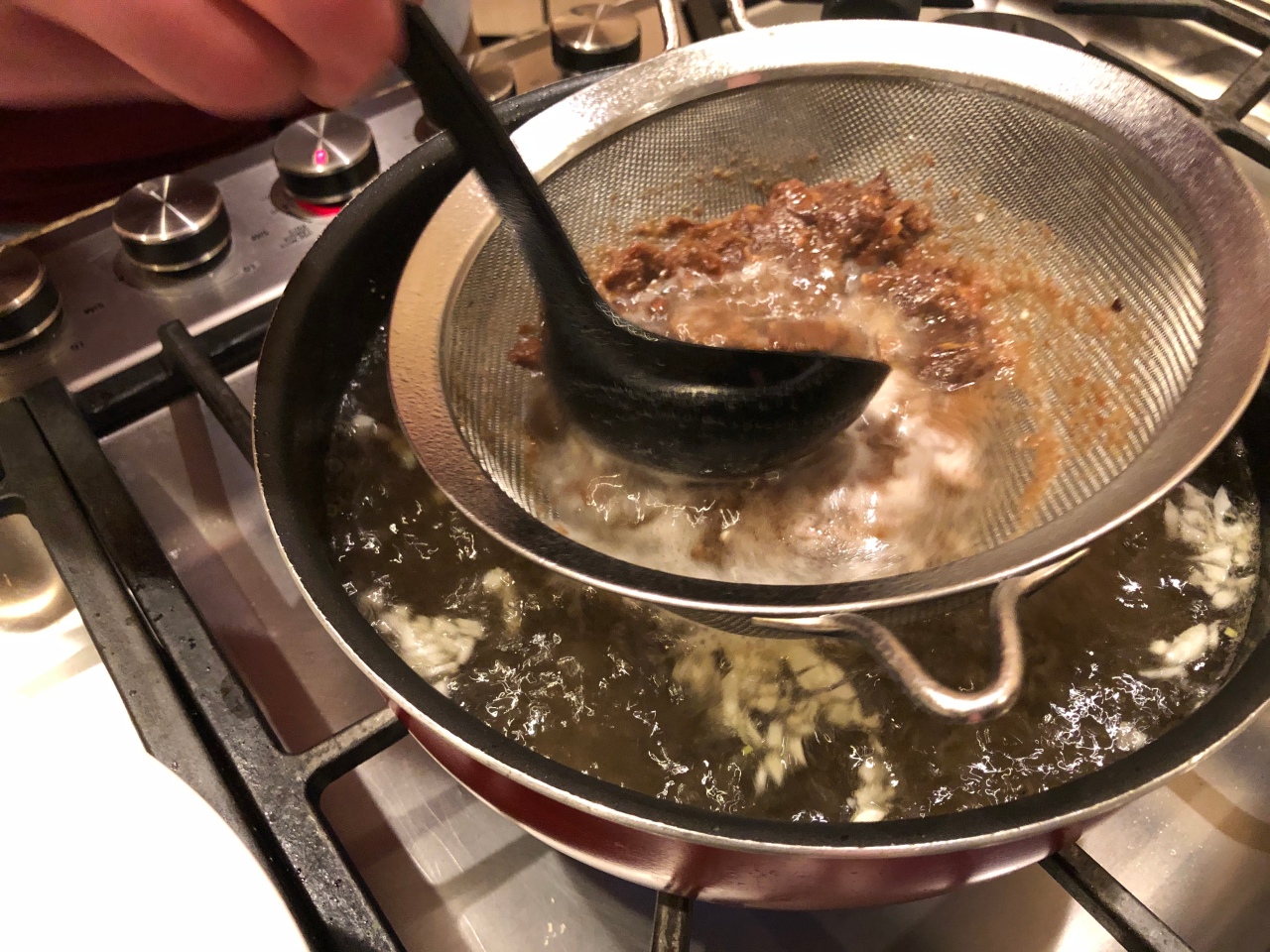 Once you have the tamarind in the broth you add the rest of the vegetables and shrimp and cook for a few minutes until they are done. At this point you add the fish sauce, sugar, and salt. We used about a teaspoon of sugar and added extra fish sauce to bring it to an approximation of what we wanted. John added some additional sugar to his bowl and I added some additional salt to mine. We both went with a squeeze of lime. 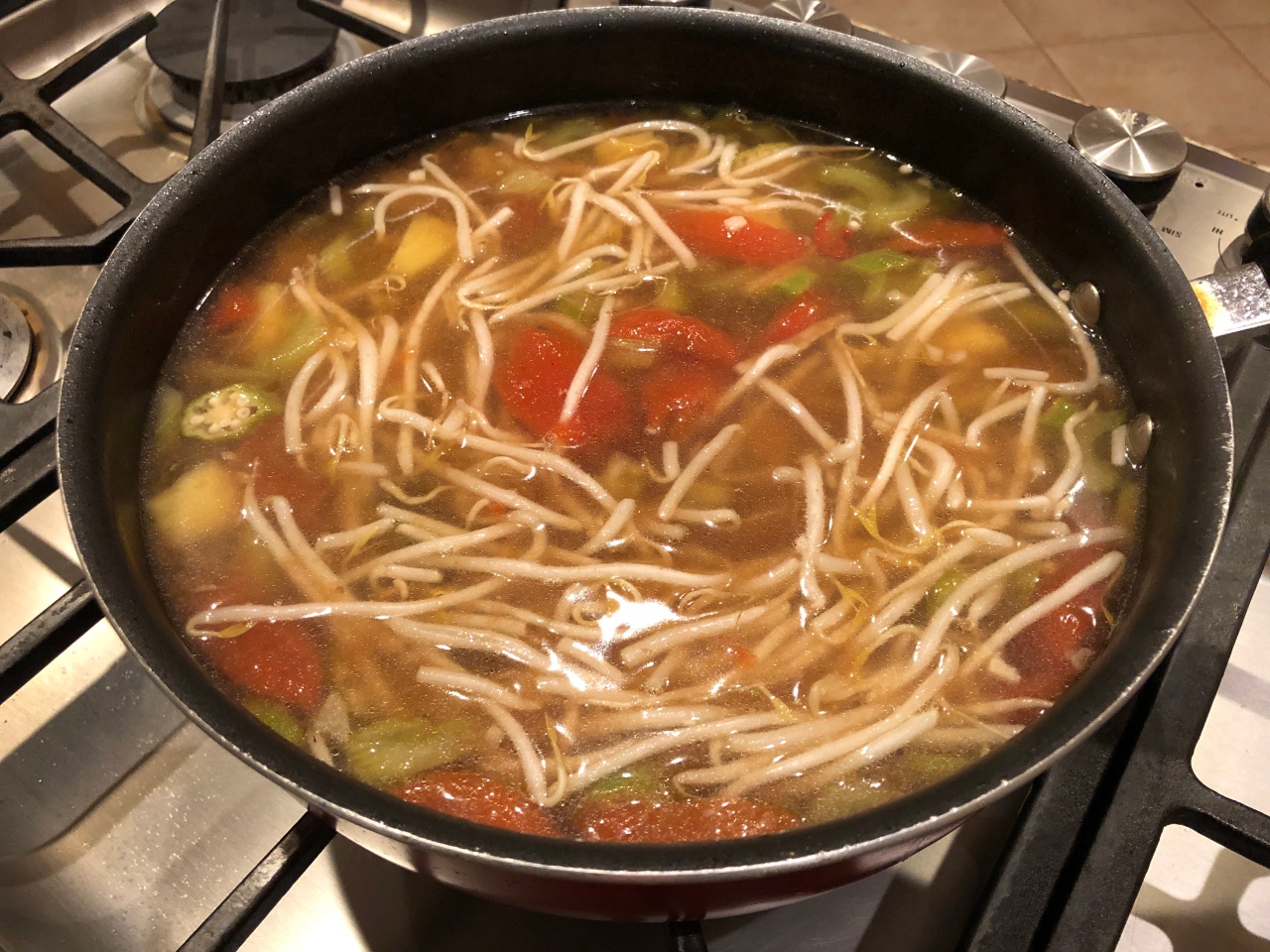 Pot with vegetables in the soup

As far as what we would do differently I would cut up the shrimp and the pineapple into smaller pieces. We might use chicken stock or vegetable stock instead of just water. John has suggested using cilantro stems in the soup instead of just the leaves for garnish. I suggested putting some snow peas in for more bulk. We are very pleased with how this turned out. It tasted pretty much the same as we made at the cooking school. We are going to try it again next week with the modifications we think will make it perfect for us. 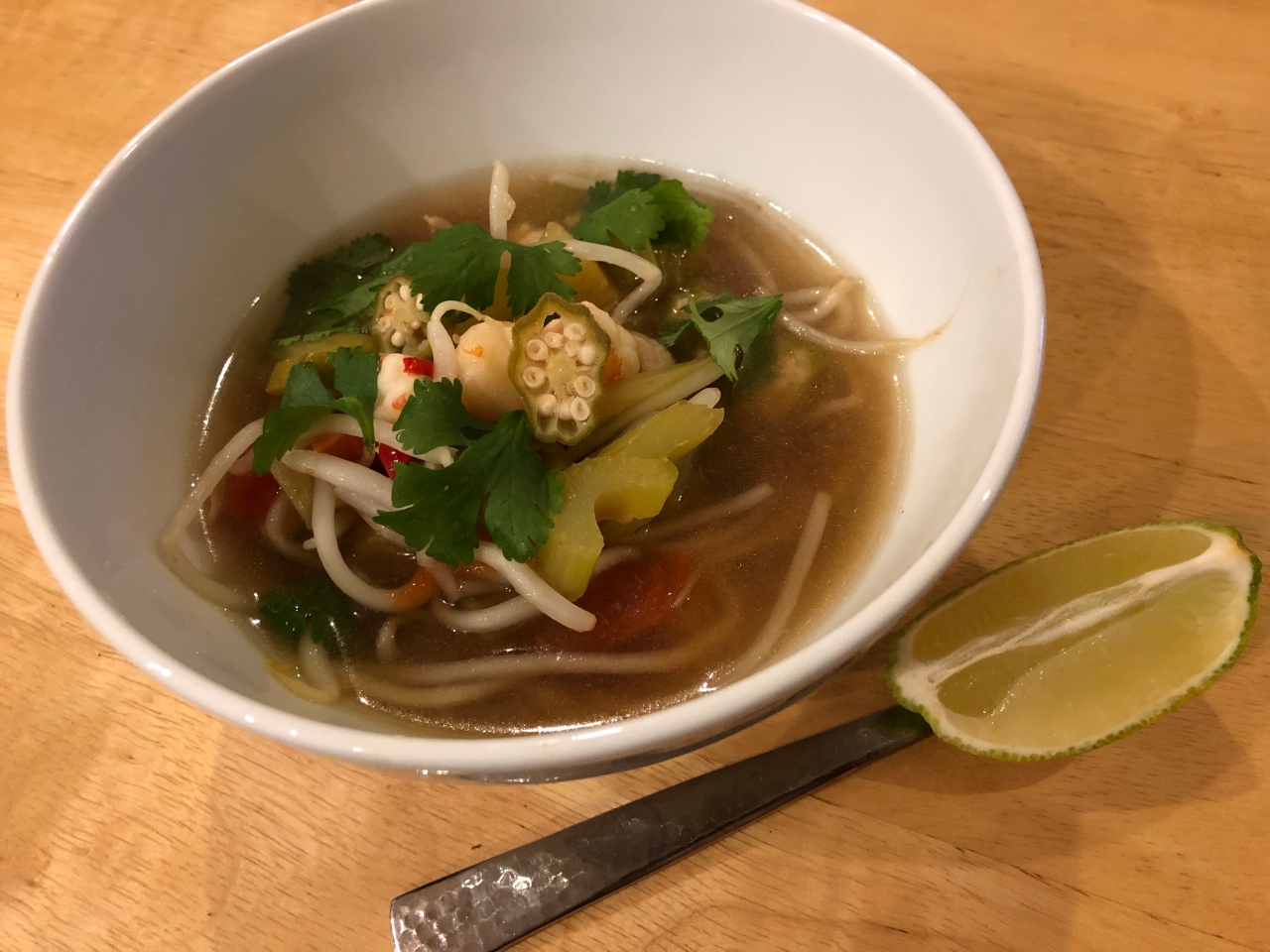