Perfectly tender Broiled Chicken Thighs, marinated and then glazed with this homemade barbecue sauce made for a great weeknight meal. Learning how to broil chicken makes it easy to get a delicious dinner on the table fast. 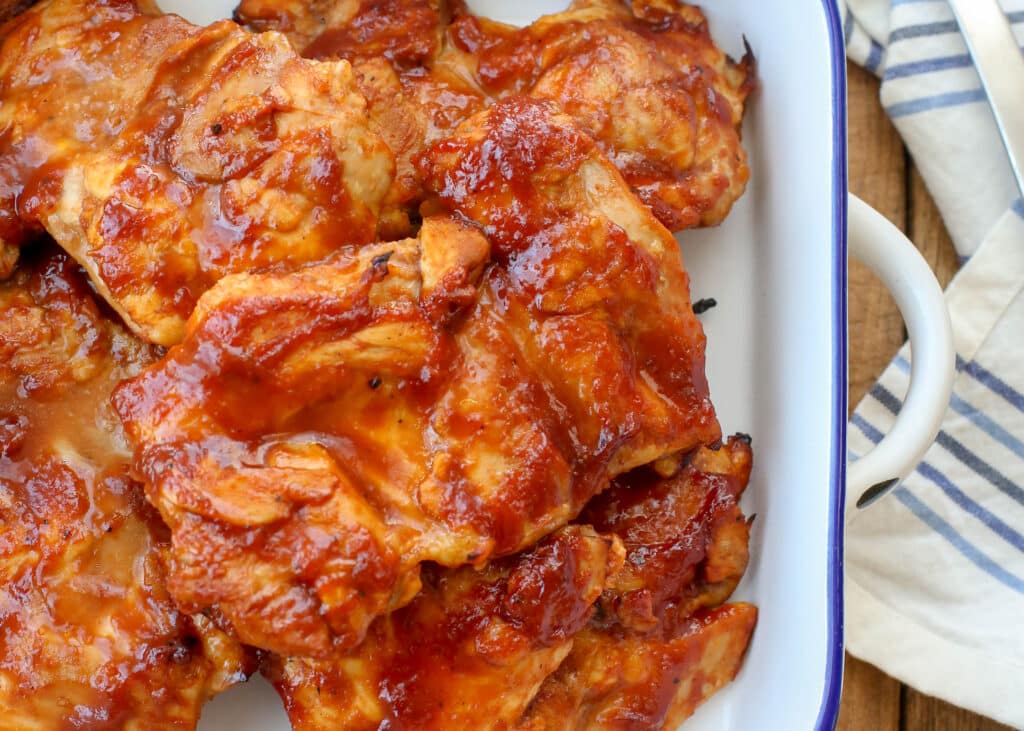 We rarely grill on weeknights, so the broiler was my tool for this meal. (My apologies in advance to Larry, Chris and Jenn. I already know that you are appalled. I promise to use my grill more frequently this year!)

I love using my broiler for quick and easy dinners. It takes almost no time at all and I am free to finish up the rest of the meal in the kitchen while it is cooking. Served with a tossed garden salad and some smashed potatoes, this is a favorite meal for everyone in the family.

How to Broil Chicken

To impart the best flavor into your chicken thighs, let the chicken pieces marinate in the barbecue sauce in a ziploc bag or large airtight container. Leave it for at least 6 hours, turning the pieces every couple of hours to be sure the sauce is distributed well.

If you toss the chicken in the sauce in the morning, it’ll be marinated and ready to cook by dinner time! Then it takes almost no time at all in the oven to get the chicken cooked through and ready to eat.

The chicken is done when the meat is no longer pink and the juices run clear. 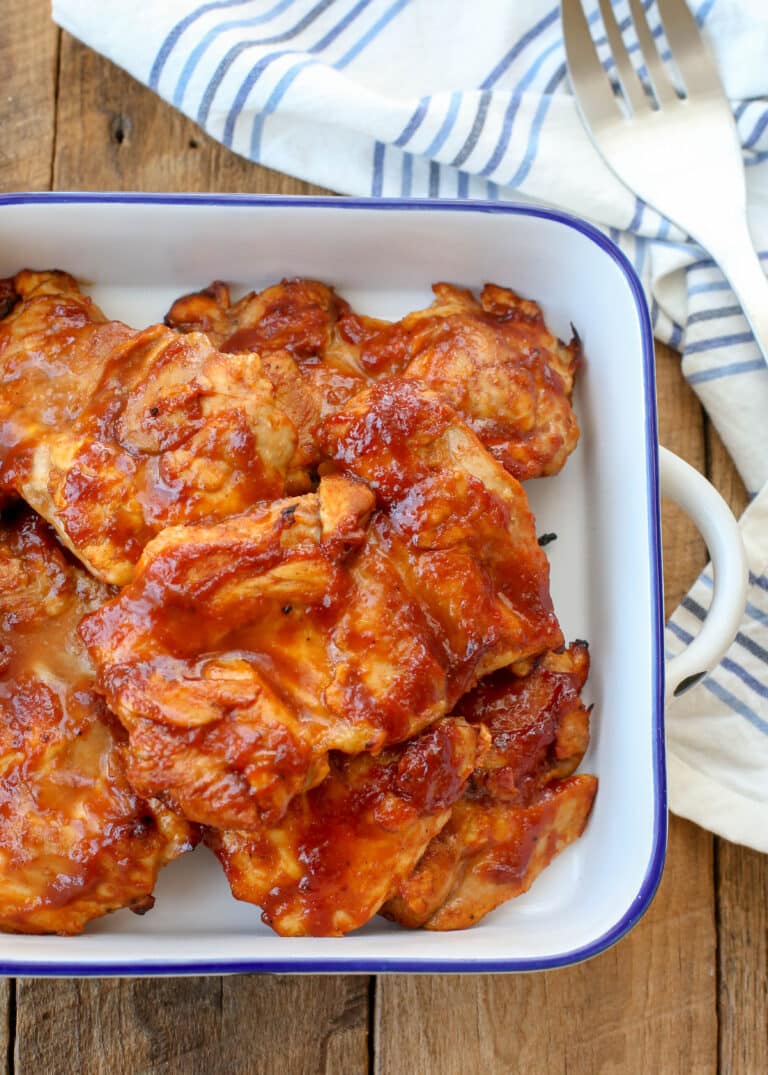 When we’re craving barbecued chicken on a weeknight, oven broiled chicken usually winds up on our menu. We love it with just about any homemade barbecue sauce.

If you like some heat with your chicken, try this recipe with my Homemade Spicy Barbecue Sauce or this Sweet and Spicy Homemade Barbecue Sauce. This Tangy Peach Barbecue Sauce comes with a fruity flair that pairs beautifully with chicken. We also love the vinegar forward flavor of Tangy Memphis BBQ Sauce.

The spicy maple flavor in this Sriracha Bourbon Barbecue Sauce is to die for, too. For an Asian spin, check out one of my all-time favorite sauces, Korean Barbecue Sauce.

Whenever I make a batch of barbecue sauce, I try to make enough to stick in the freezer for later. When the barbecue sauce is ready to go, making a full barbecued chicken meal is as easy as can be. If you don’t have any homemade barbecue sauce handy, a bottle of your favorite store-bought sauce works just as well!

I’m all in favor of any short cuts that make getting dinner on the table even easier! Whether you make these broiled chicken thighs with homemade or bottled sauce, I know you’ll love it as much as we do.

Easy and delicious, these Broiled Chicken Thighs make a perfect weeknight meal. Served with a side of  Baked Beans,  Potato Salad or  Coleslaw, it’s bound to become one of your family’s favorite dinners. 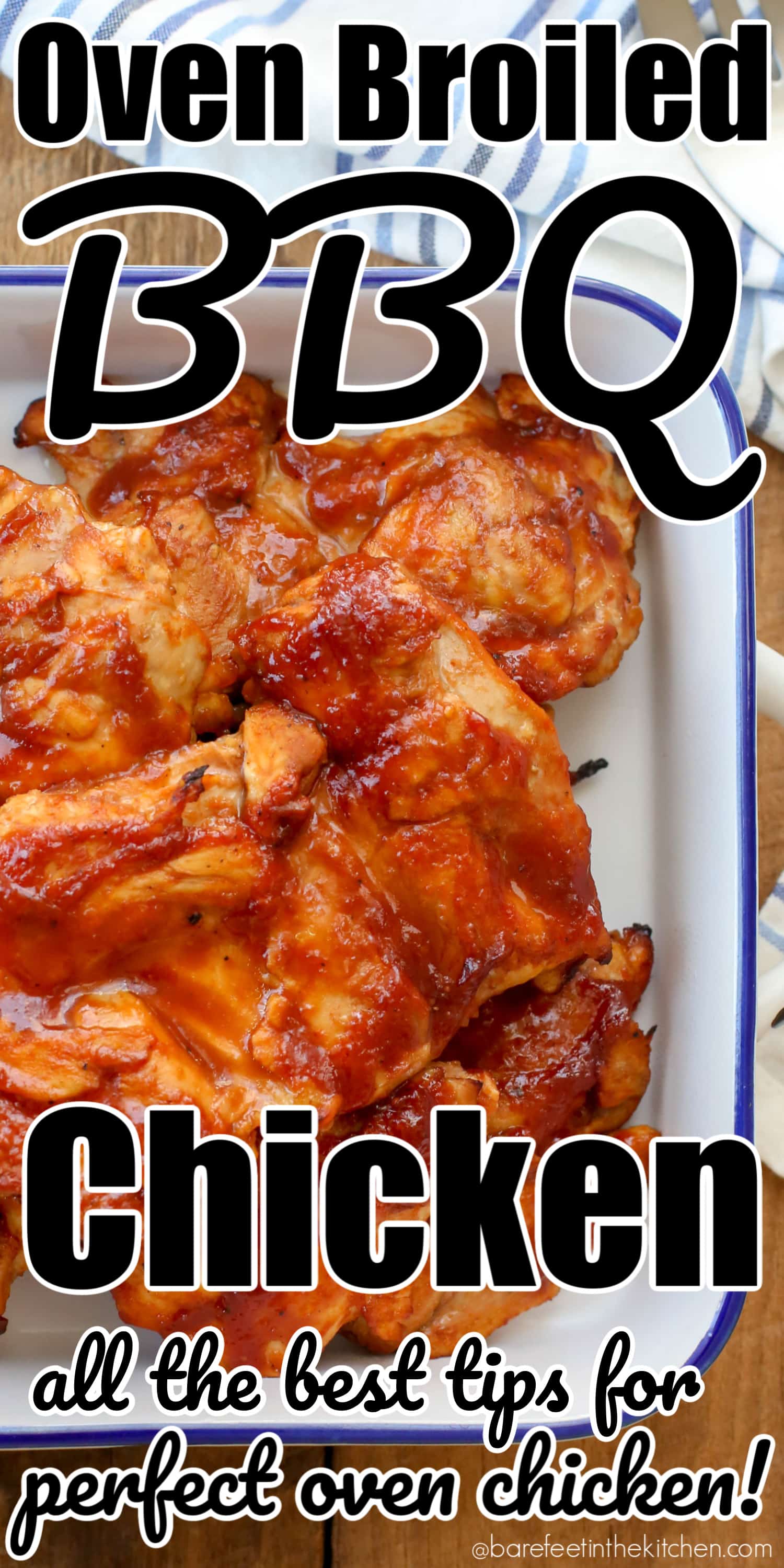 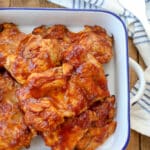