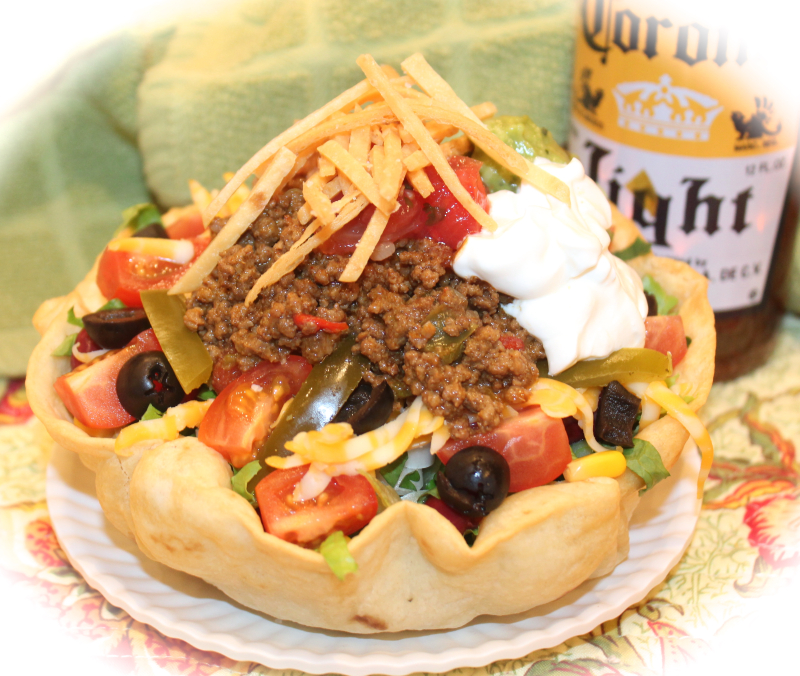 Taco Tuesday.  I'm clueless as to who started it, but, I thank them profoundly.  Like pizza and cheeseburgers, it's downright difficult to find a man, woman or child who is disappointed at the sight of tacos on their lunch or dinner menu.  Other than needing a fork, taco salad is not much different than eating tacos. Served in a large, deep-fried, edible flour-tortilla shell, anything and everything one would expect to find in a pick-it-up-to-eat taco can be served in a taco salad.

Serving taco salad in edible bowls is mealtime fun.  While they lend a festive, impressive "you cared enough to make the bowls" touch to the meal, they allow family and friends to add crunch to their salad as they work their way down, through and around all the goodies in the bowl. Speaking of goodies, taco salads come fully-loaded.  Pick and choose your favorite store-bought or made-from-scratch ingredients.  There's no right or wrong way to make taco salad -- just make it.

A taco salad is a divinely delicious & decadent meal. 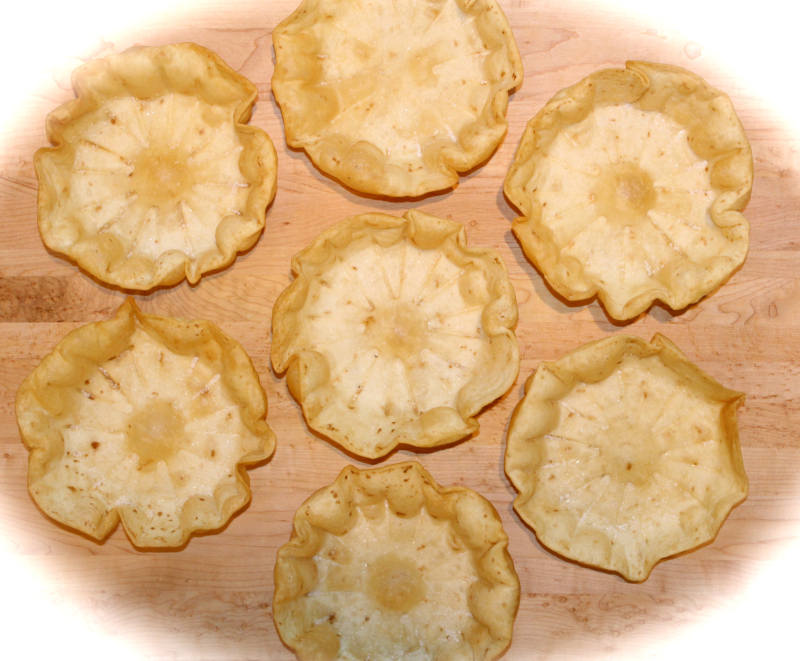 The most common ingredients in a taco salad (also called a taco bowl) are: Tex-Mex-spiced ground beef, shredded steak or chicken (small shrimp are good too). The list goes on:  crumbled Mexican cotija- or queso fresco- or shredded queso blanco- cheese (jalapeño Jack, Monterey Jack, Colby Jack or cheddar are often used in their place), crispy iceberg or romaine lettuce, sliced green or black olives, corn kernels or Mexican rice, black beans or refried beans, pico de gallo (salsa fresca or fresh salsa), Mexican crema or sour cream, and, sliced avocado or guacamole -- and let's not forget those cilantro or scallion garnishes too.  With all or even some of that going on, make no mistake, while every forkful of a taco salad is divinely delicious, it is decadent -- "healthy" or "light" are hardly the words I would use to describe this meal.

From a small tacup, the large taco salad was born. 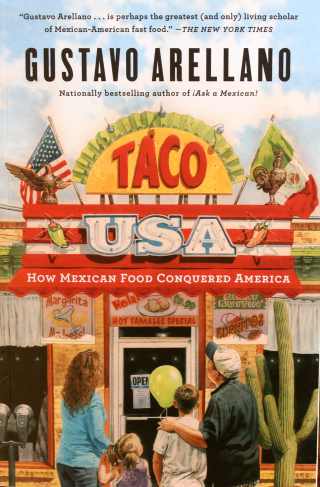 The history of the taco-bowl salad, as per this book, Taco USA, How Mexican Food Conquered America:

The earliest record of taco salad dates back to the 1960's, with its predecessor being the small teacup-sized Tacup:  Ground beef, beans, sour cream and cheese served in a small bowl made entirely of Fritos.

The Tacup was the creation of Fritos founder Elmer Doolin*, who invented all sorts of "strange stuff" spinned-off his Fritos: Frito sauce for meat, Frito Jell-O pie, Frito salad dressing, and, the Tacup (short for taco cup).

Tacups were first served in Dallas, TX (where Doolin headquartered Frito), in the early 1950's, and by 1955, he was selling them in Fritos' flagship restaurant, Casa de Fritos, at Disneyland in Anaheim, CA.

The Tacup became popular enough that folks decided to make it bigger -- the taco salad, served in a full, main-dish-sized bowl was born.

*Doolin founded Fritos, bit its worth note that Fritos were a wholly Mexican creation, invented by an Oaxacon immigrant who sold his recipe and machine to Doolin in the 1930's.  It's also worth note that heading the Casa de Fritos were members of the Morales family, known for their XLNT tamale brand, and their family would go on to invent Doritos and the famous Doritos taco salad.

No pressure.  Go as scratch-made or homemade as you want. 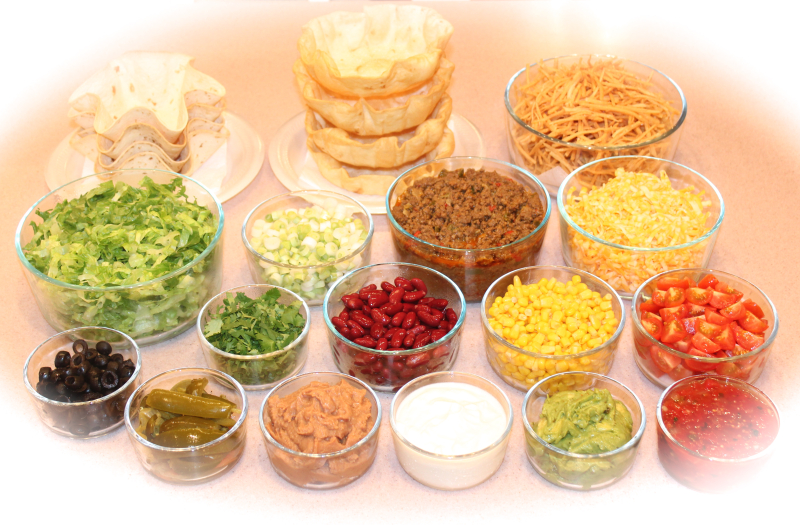 Taco-Salad Tuesday is all about having fun w/family.

For each salad (listed in order of addition):

~ Step 2.  Place a measured scoop of the warmed beef mixture in the center of the top of salad. Decoratively dollop the determined condiments on top of the beef filling:  the refried bean dip, avocado crema (or guacamole or sliced avocado), Mexican crema (or sour cream) and pico de gallo.  Garnish with deep-fried flour tortilla wisps.

Serve immediately.  Stick a fork in it &, have at it: 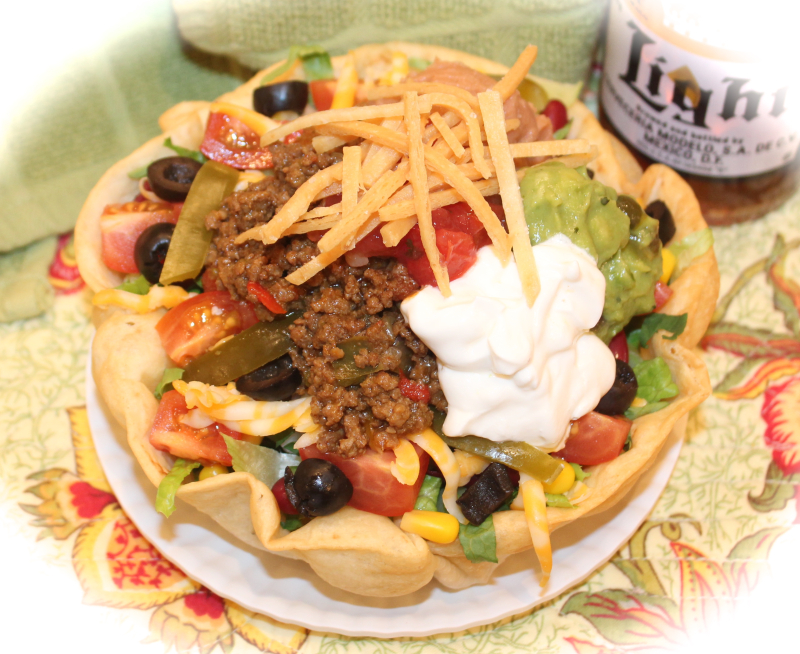 Instead of Taco Tuesday, Taco-Bowl Salad Thursday:  Recipe yields instructions to make as many taco salads, served in edible bowls, as you want to. 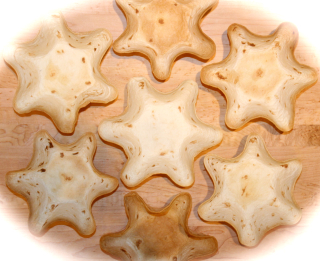 Cook's Note:  Not a fearless fryer? That's ok.  Lot's of folks fear frying. The good news, there's another way to go about making your own edible bowls using inexpensive bowl molds in the oven.  Learn ~ How to Make Baked Restaurant-Style Taco Salad Bowls ~.  Your family and friends will thank you.

"We are all in this food world together."  ~ Melanie Preschutti